My dad Neal has gone to Heaven 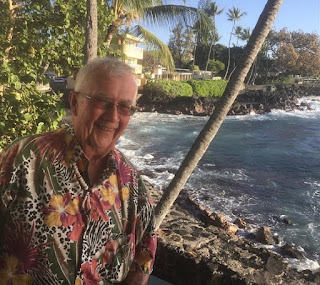 My dad Neal passed away peacefully at hospice, Friday August 5th, 2022. He will be lovingly missed by his wife Mars, sons Corey & Jason (Samantha), his grand-daughter Olivia who was the “Star in his sky”; and his many family members and close friends.  Neal was predeceased by his brother Richard.

Neal loved to teach and spent many years as Principal at numerous Kelowna elementary schools. Prior to his principle years in Kelowna Neal and Mars spent a few years as a teaching "team" for the Department of National Defence in Germany.  This allowed them to travel & explore extensively at their leisure, having adventures & forming friendships in Europe that last to this day. 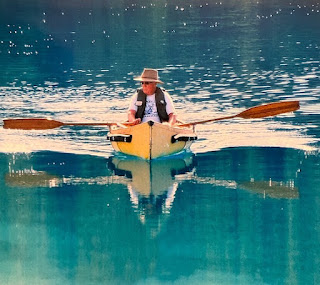 Neal REALLY LOVED the month of February when Hawaii was "home" taking "magical mystery tours" around the Big Island exploring new beaches to snorkel & swim with the turtles.

At Neal's request, there will be no service or flowers.

We give heartfelt thanks to Dr. Dan Obedkoff and Dr. Peter Andrew, as well as the hospital and hospice staff that gave him care and compassion.

Mira Furlan died on January 20, 2021 at the age of 65, from complications from West Nile virus.  This is very sad news to hear after a very bad week for me.

I feel fortunate to have had the honor & pleasure of meeting Mira back in 2011 at the Comic Expo here in  Calgary, Canada, and attended the talk she gave here about her career.  I wish I could find a recording of her talk.

She was so kind and giving with her time with the fans, and we had great fun in our photo op!  In my chat with her, I mentioned to her that my given name was Cornelius. She liked the name Cornelius so much that she personalized her autographs to me with it and said I should use it in my everyday life rather than Corey.  I'm so sad that she has passed beyond the rim.  I hope we meet again in another life.  When I watch a sunrise, I will think of you Mira. 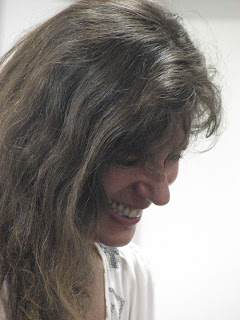 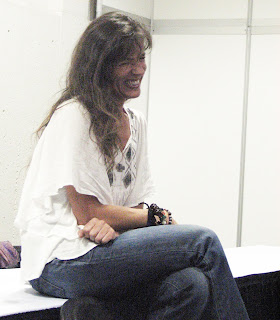 A couple of candid photos from during her Calgary Expo talk (2011). 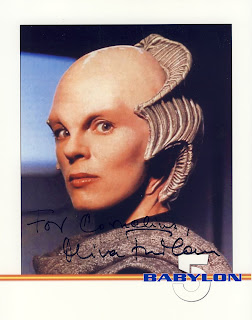 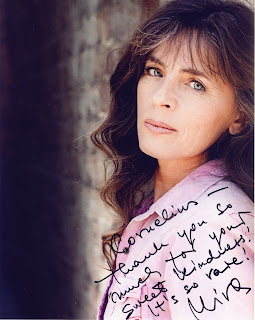 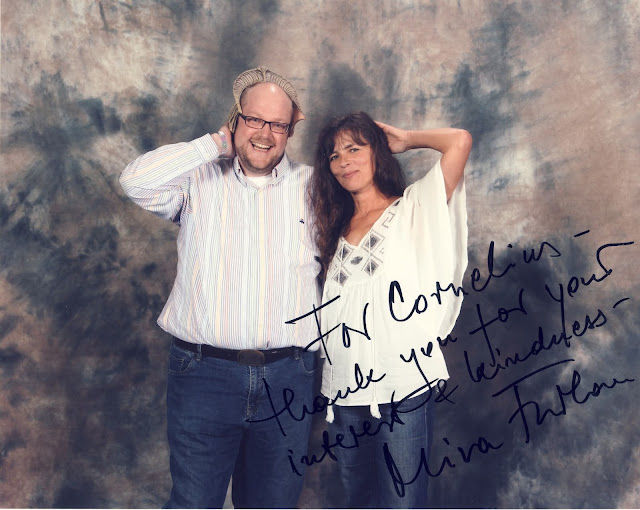 She was so generous to have a bit of fun with me in our photo op. Originally, I asked Mira to wear the Minbari headpiece, but she said I should wear it as an "honorary Minbari".  She thought of the pose for the photo. 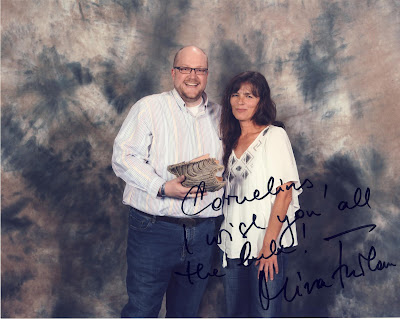 Here are 2 lovely readings by Mira (from her website).

Here are some other tributes to Mira from her Babylon 5 co-stars (harvested from the Internet today):

It is a night of great sadness, for our friend and comrade has gone down the road where we cannot reach her. But as with all things, we will catch up with her in time, and I believe she will have many stories to tell us, and many new roles to share with the universe.
In Memoriam: Mira Furlan
When Mira Furlan came to audition for Babylon 5, her home country of Yugoslavia was in turmoil and shattering into two separate countries. During our first meeting, we spoke about her work and her life, and I learned that she had been part of a touring theater group that continued to cross borders of the disintegrating country despite receiving death threats from both sides in the civil war. I expressed my admiration for her courage, but she shrugged and waved it off. “What’s the worst that could have happened? Yes, they could have killed me. So what? Art should have no borders.” Very few people knew that side of Mira: the fiery, fearless side that fought ceaselessly for her art. She brought all of those traits to Delenn, and in turn I tried to write speeches for her that would allow her to comment on what was happening to her homeland without calling it out by name. I guess I must have done it correctly because one day during the Minbari Civil War arc, she appeared in my office door, a cup of tea in one hand, in full makeup but wearing a pull-over robe from wardrobe, and said, “So, how long did you live in Yugoslavia?”
Her husband, Goran, has always been the rock of her life. He was and is a gentleman, quick to laughter, an accomplished director and as much an artist as Mira, which made them the ideal couple. I’ve rarely seen two people so utterly meant for each other.
I remember the first time Mira appeared at a convention with me and some of the other cast. She didn’t quite understand what it was all about, but gamely did her part. When the audience question period came along, a fan held up his hand and said to Mira, whose Yugoslavian accent was much stronger in the beginning than it became with time, “Say ‘moose and squirrel.’”
She had no idea what this meant, but she said “Moose and Squirrel” and the room erupted in one of the longest sustained laughs I’ve ever seen at a convention. We explained it later, but really, all that mattered to her was that the audience had been happy.
We’ve known for some time now that Mira’s health was failing…I’m not sure that this is the right time or place to discuss the sheer randomness of what happened…and have all been dreading this day. We kept hoping that she would improve. In a group email sent to the cast a while back, I heard that she might be improving.
Then came the call from Peter Jurasik. “I wanted you to know that Goran’s bringing Mira home,” he said.
“Do you mean, he’s bringing her home as in she’s better now, or is he bringing her home as in he’s bringing her home?”
“He’s bringing her home, Joe,” Peter said, and I could hear the catch in his voice as he said it. And as a family, we held our counsel, and began the long wait, which has now ended.
Mira was a good and kind woman, a stunningly talented performer, and a friend to everyone in the cast and crew of Babylon 5, and we are all devastated by the news. The cast members with whom she was especially close since the show’s end will need room to process this moment, so please be gentle if they are unresponsive for a time. We have been down this road too often, and it only gets harder.
If you are a fan of Mira’s work, fire up those special moments when she shook the heavens, and relive the art she brought to her work. For any actor, that is the best tribute possible: for the work to endure. As much as this is a time to grieve, it is also a time to celebrate her life and her courage.
All of our thoughts tonight will be on the memories she left behind, the dazzling light of her performances, the breadth of her talent, and the heart and love she shared with Goran, and with all of you.
Joe Straczynski

Yesterday, I was brought to my knees.
She was one-of-a-kind. Although she had endured much heartache in her life, she always seemed to find a place in her heart for others and was especially passionate about causes. She was a living contradiction: a beautiful, graceful, compassionate soul with a strong, fierce, commanding courage. My wife has always described her as “angelic.” I can’t think of a better description in one word. Her welcoming aura was felt by anyone who had the privilege of being near her.
We have lost a light in our galaxy, but another has gained one. I will miss our talks, our laughs, our deep discussions about Hollywood and life. I will miss our dinners and trips abroad. I will miss the way her eyes sparkled when she smiled. I will miss her captivating voice and contagious laughter. I will miss sharing with her one of the most gratifying experiences of my life: the relationship between Sheridan and Delenn.
I will miss her.
Bruce

I could write about how close we were and how brilliant she was and how we laughed and cried together and how much we enjoyed working together. But I just can’t now. R.I.P. Mira. Love you. 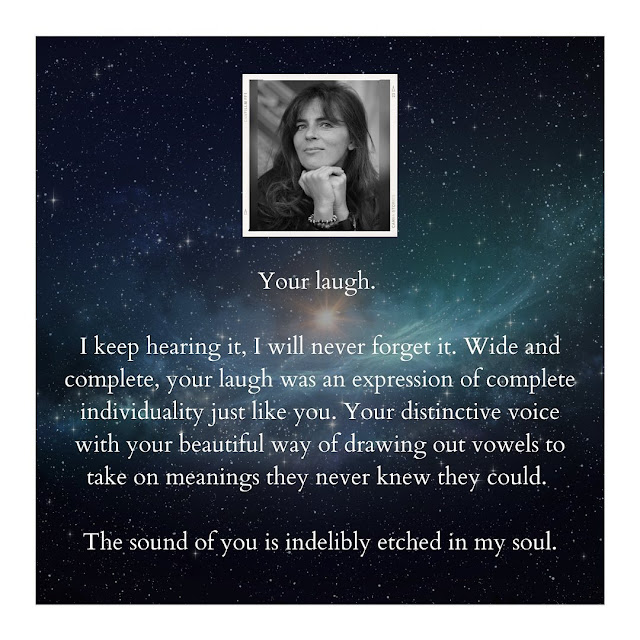 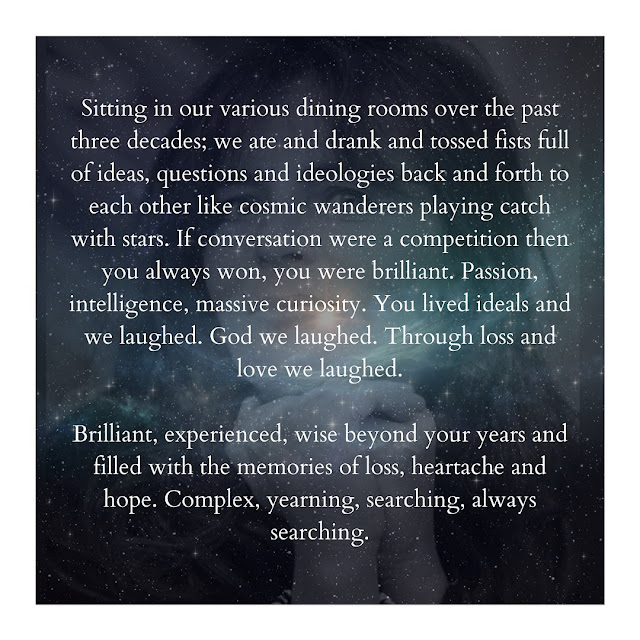 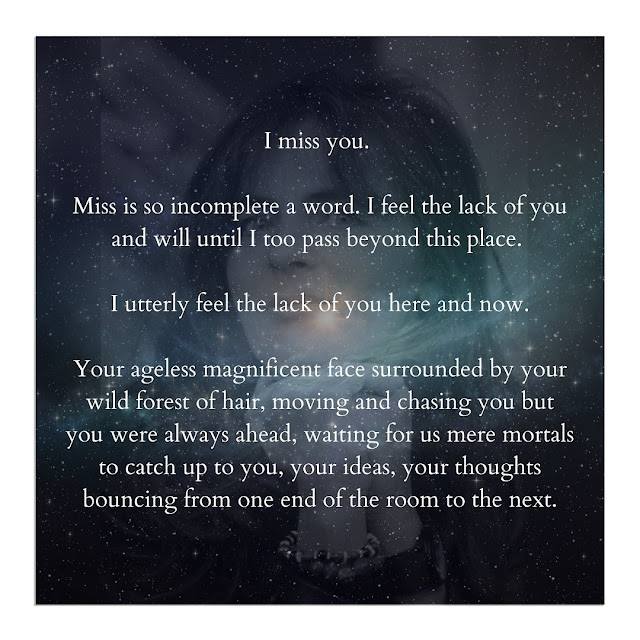 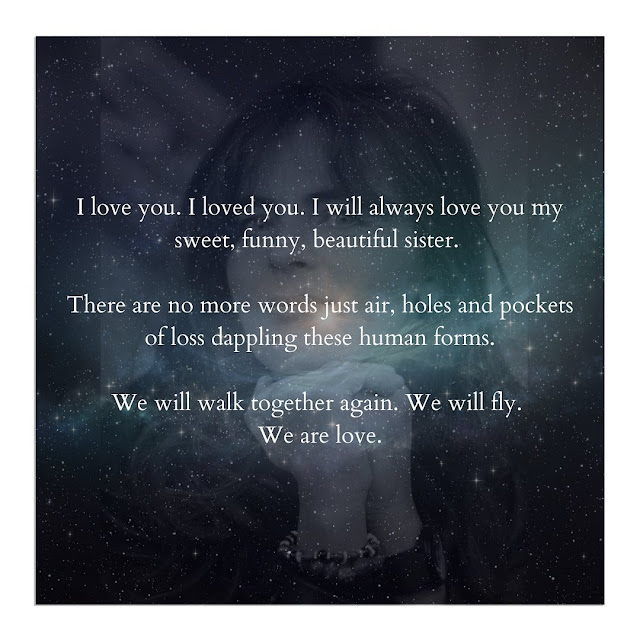 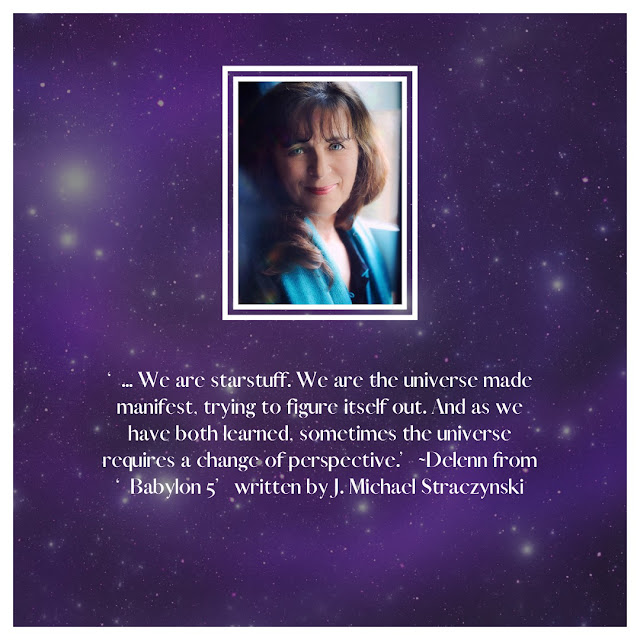 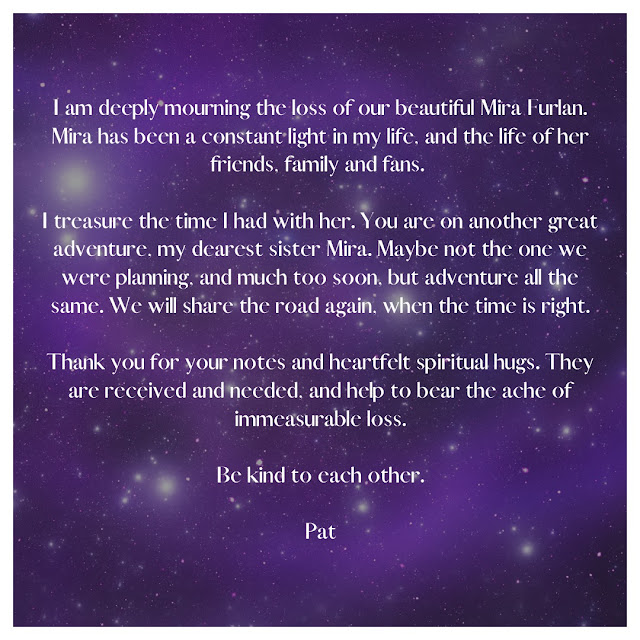 
Stan was so great with the fans.  In that short 15-30 seconds you had with him at his autograph table, or in a photo op, he really made you feel special.  After giving Stan the first book in 2012, he emailed me the next day, thanking me. "Clever as hell and really well done." And the following year, he thanked me again for Issue #2.   Stan really knew how to make fans feel fantastic!

I have the book, photo, and his email framed in a place of honour in my home.

See you in the next multi-verse Stan! Thank you for so many years of Excelsior!

PS: Thanks to my friend Russell interviewing me this morning about Stan.  Here's Russell's blog post about Stan's passing.

Comic Expo 2017 was a ton of fun (it always is for me!).  This year's media guests that caught my eye were:


Some wisdom from a wonderful piece of cinema

Day 51
The only real failure is the failure to try.
And the measure of success is how we cope with disappointment, as we always must.
Can we be blamed for feeling too old to change? Too scared of dissapointment to start it all again?
We get up in the morning, we do our best. Nothing else matters.
But its also true that the person who risks nothing, does nothing, has nothing.
All we know about the future is that it will be different. But perhaps what we fear is that it will be the same.
So we must celebrate the changes.
Because, as someone one said, "Everything will be alright in the end, and if it's not alright, then trust me, it's not yet the end!"
- Evelyne from "The Best Exotic Marigold Hotel"

Photos from the 2015 Comic Expo 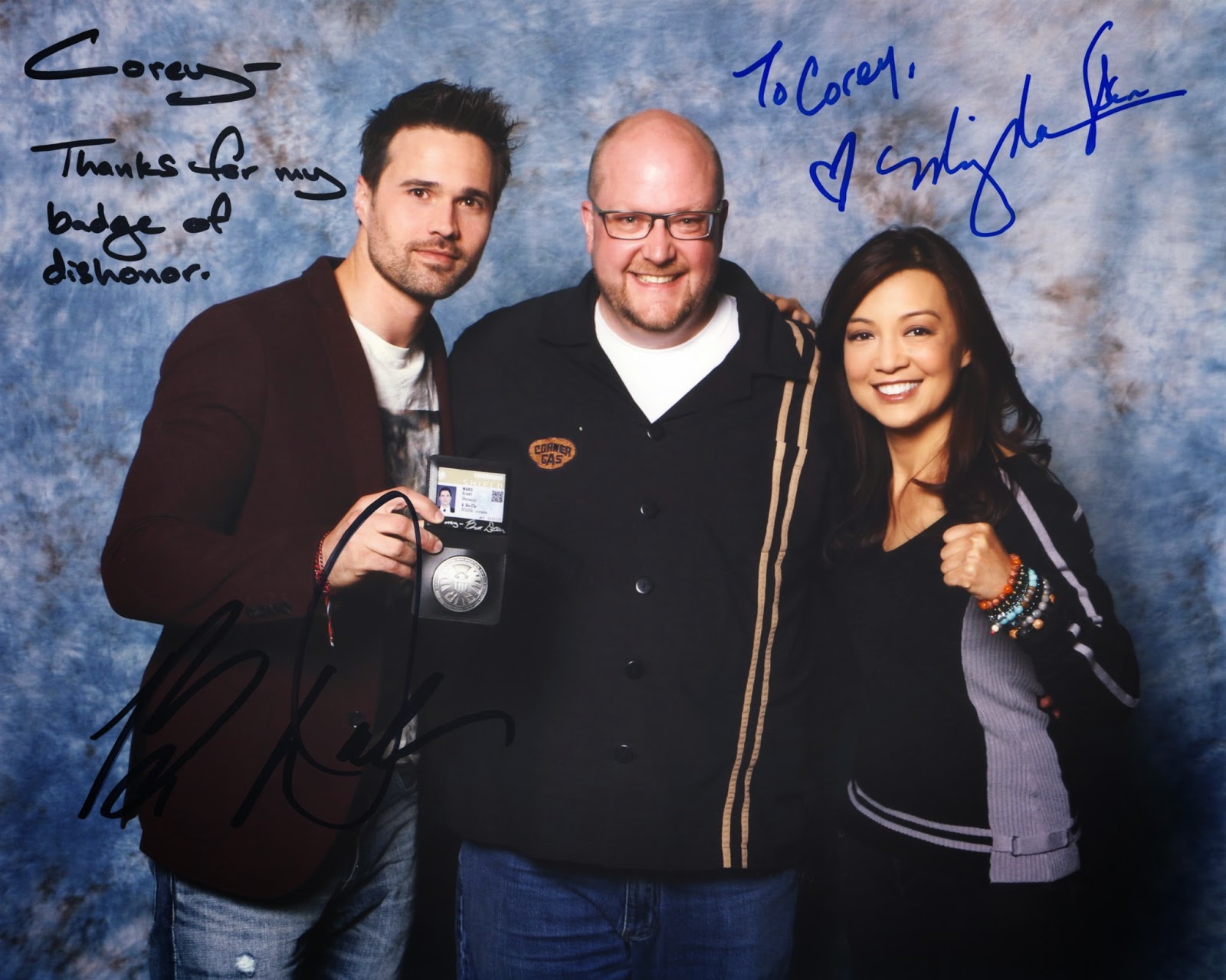 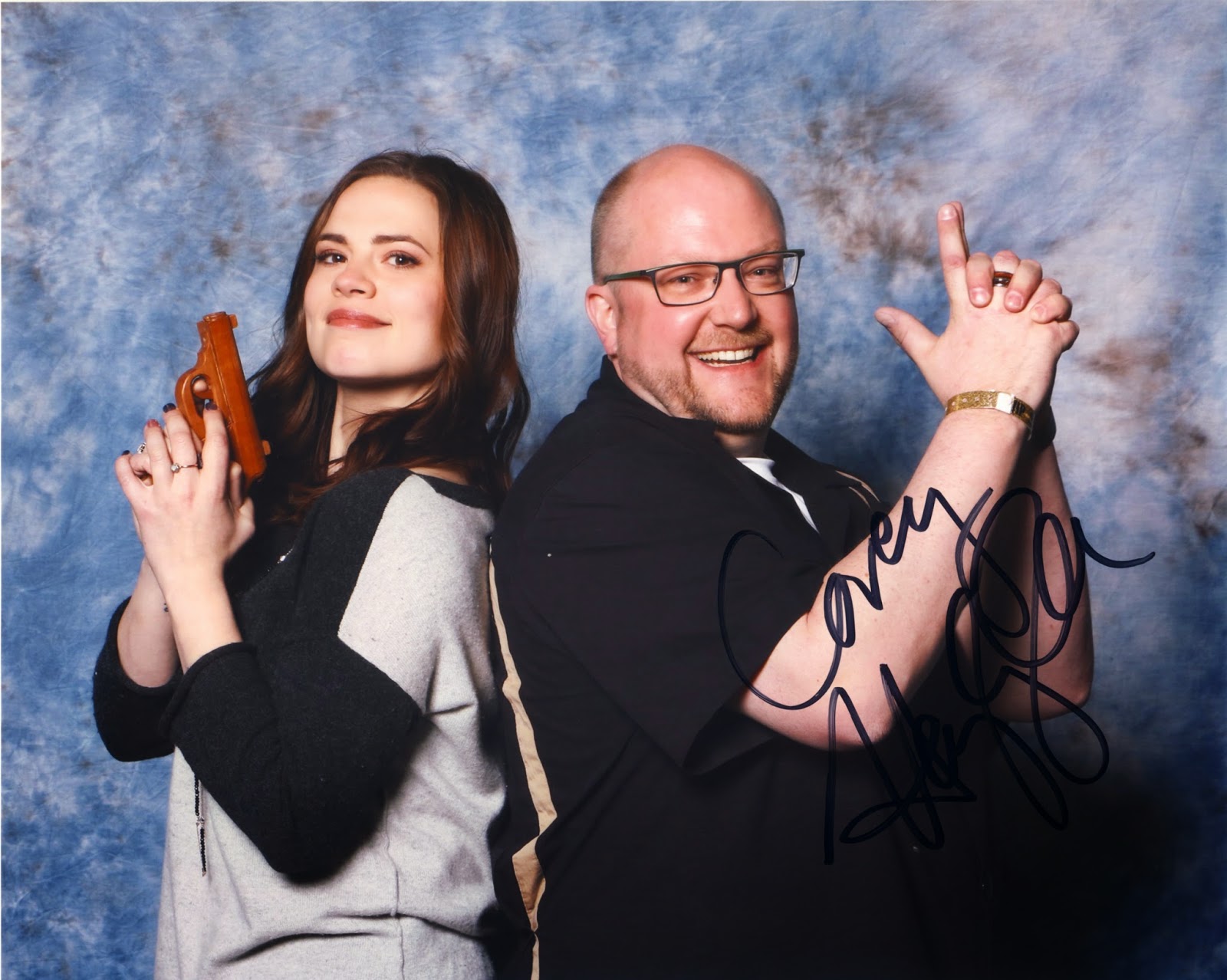 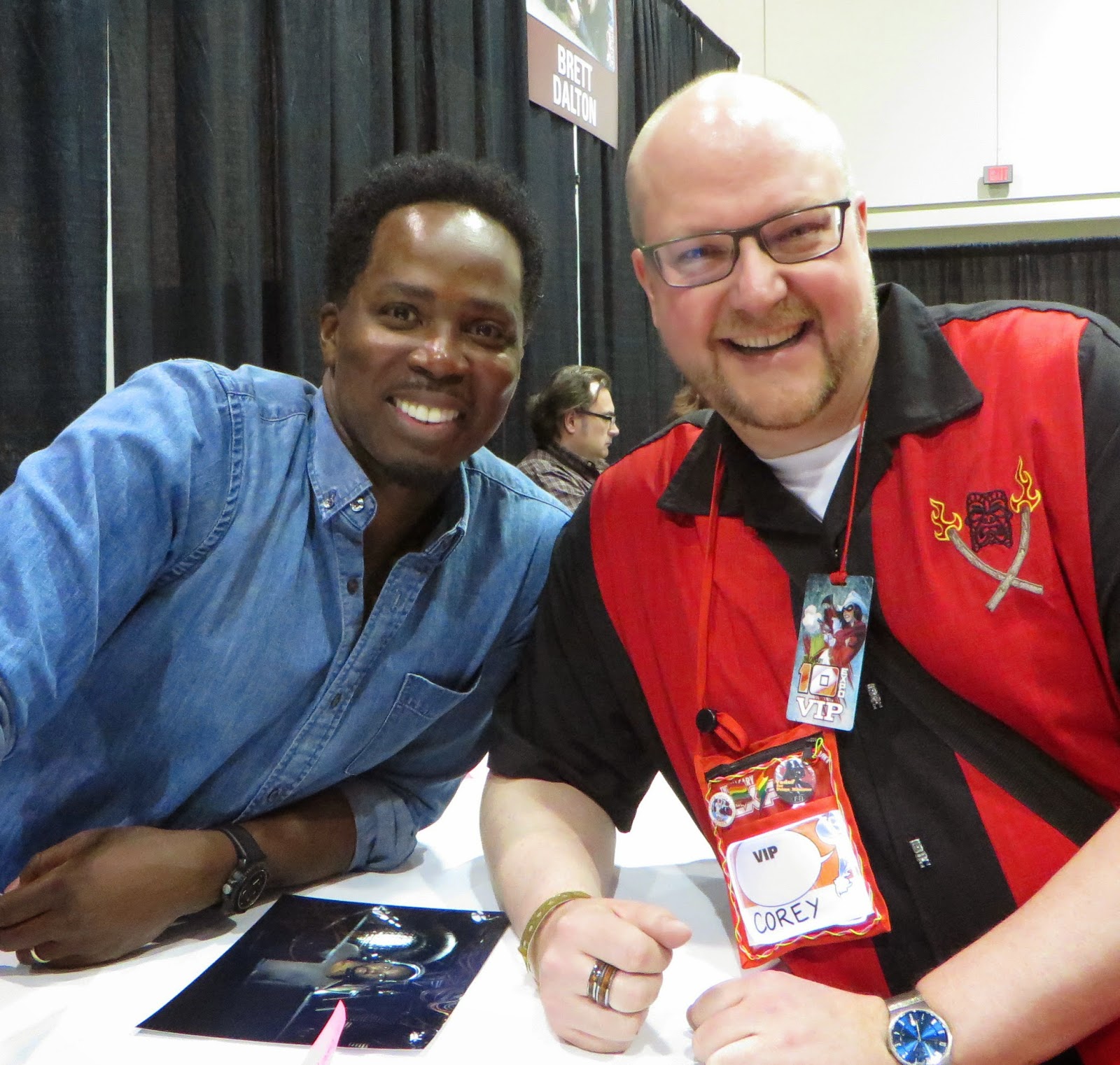 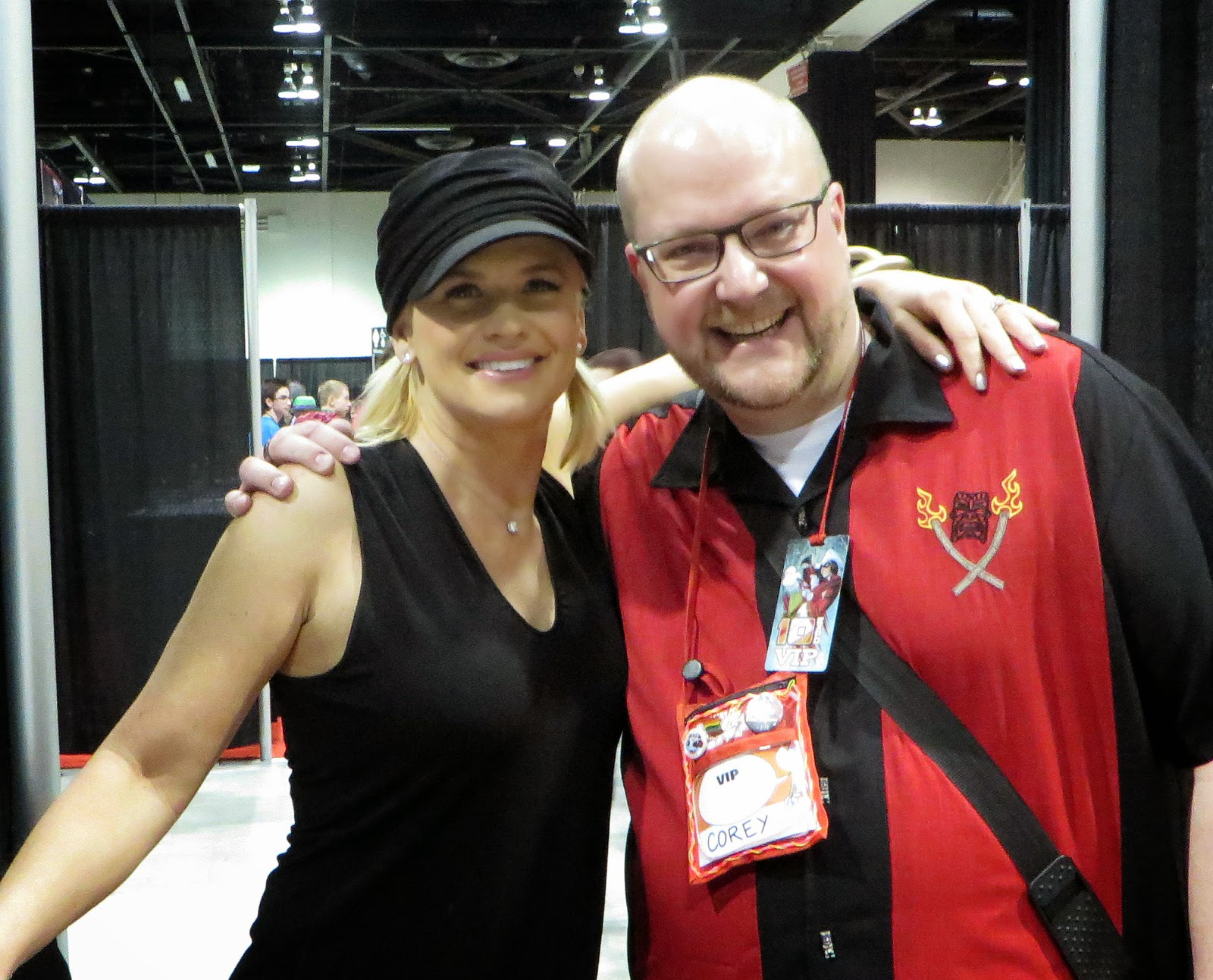 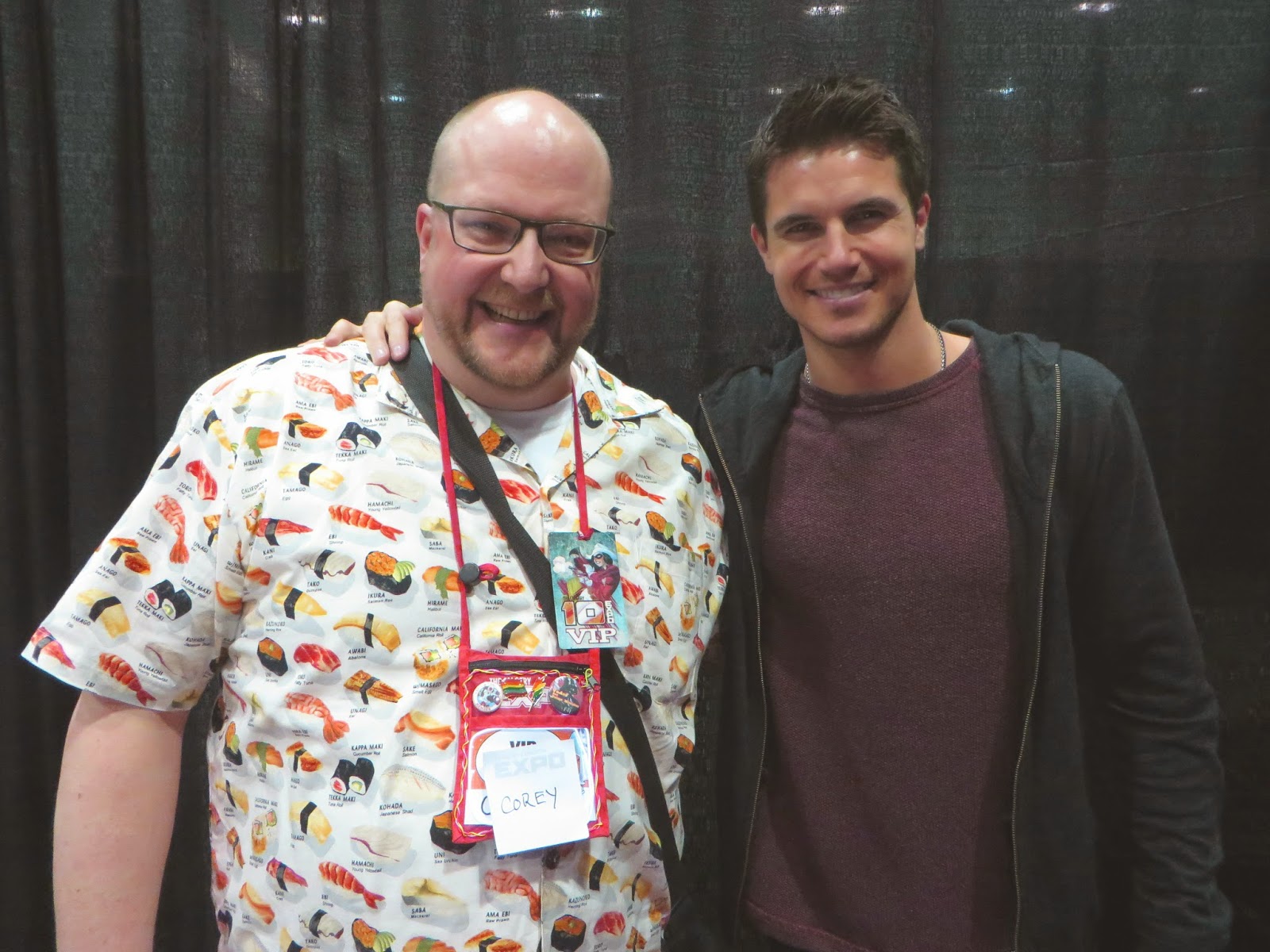 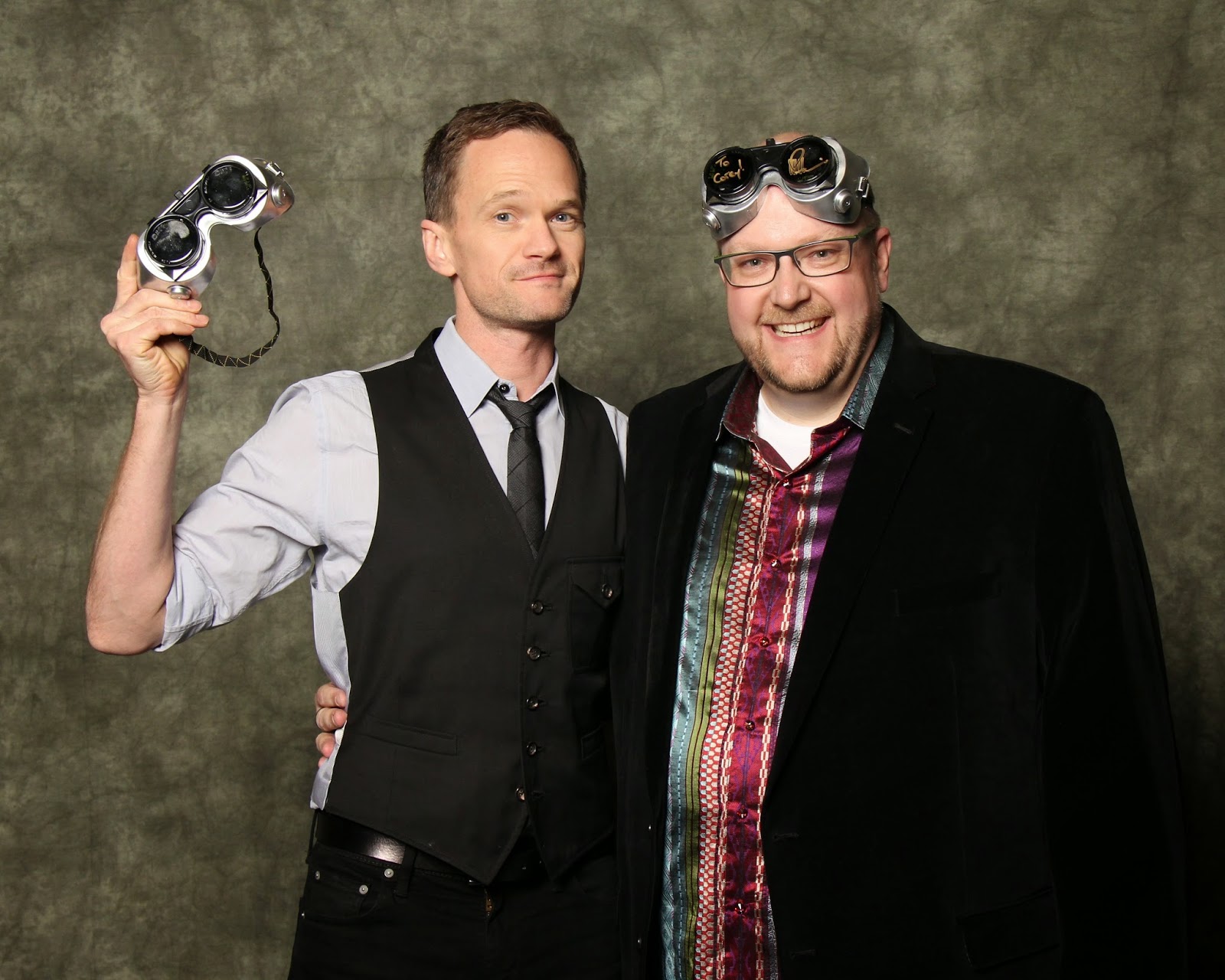