Before the pandemic, when I was still working downtown, most days I would go out with my co-workers to have lunch in Chinatown.  There are many restaurants there that have great food at a reasonable price, and you get FED!

Some of my favourites that I'm really missing right now because of the pandemic:
I hope to return to my favourite Chinatown lunch places soon!

* not sure if these locations are defunct, name-changed, or are just named "Burger Baron" by coincidence.  Such is the nature of independent small businesses.

It's fantastic that we've had Burger Barons in the West since the 1950's! Seldom does anything Canadian grow so successfully in the shadow of  American mega-chains.

This past Friday, Omar Mouallem debuted his FANTASTIC TV-documentary about the history of Burger Baron called "The Last Baron".
Omar's parents ran the Burger Baron in High Prairie, AB (which is now the "Boondocks Grill" run by Omar's brother Ali).  The Last Baron is part historical documentary of the Burger Baron "chain", and part family photo album.  It's great to learn so much about this piece of Canadian food history that has a special spot in my heart, and how Burger Baron gave families an escape-route from the war in Lebanon to start new lives here in Canada.
Omar's also launched a crowdfunded project to turn "The Last Baron" it into a feature-length documentary film.  If you have ever enjoyed a Burger Baron burger, I highly recommend you become a backer!
Thank you Omar for this sharing the history of Burger Baron! Your interviews with so many folks involved with Burger Baron including Terry McDonnell, son of the Burger Baron originator Jack McDonnell are very eye opening and educational.  I had no idea that The McDonnell's setup the first Burger Baron in Calgary back in the 50's, and then things "transitioned" in the 60's/70's to the Kemaldean's and other Lebanese & Palestinian families after the original franchise went bankrupt.
I love how each Burger Baron is independent, and that gives diversity to each of their menus, making each restaurant as unique as the family that owns it.  It reflects the diversity of our "Canadian Mosaic" versus the more homogeneous U.S. "melting pot".  The absolutely-standardized big burger chains would only setup franchises in towns of a certain size.  Burger Baron brings good quality fast food to small towns that likely would never get a fast-food joint any other way.
And I love how each Burger Baron has it's own family story.  The "chain" of Burger Barons is like a family of families, complete with their disputes, arguments, legacy, and everything.
Here's some more links about "The Last Baron" that I found...
Congratulations Omar on "The Last Baron"!
(updated November 2020)
In September 2019, as per birthday tradition, I went up to Edmonton to attend their Comic Expo.  Outside the Expo, I spent some time to find some of the Burger Baron's that are still in Edmonton.  And I got to meet fellow Burger Baron fan Donovan Workun who put up a Burger Baron sign on his house that he bought from the 82 Ave location the day they closed. 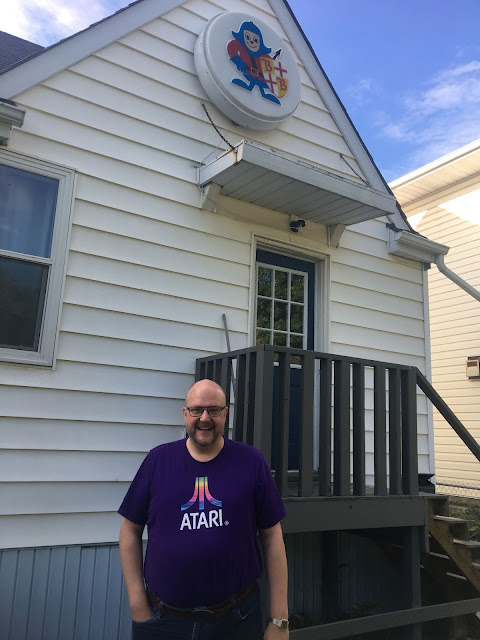 Donovan's son was also starting up a T-shirt silk-screening business and they got permission to use the Burger Baron logo. They are some of my most prized T-shirts that I have. 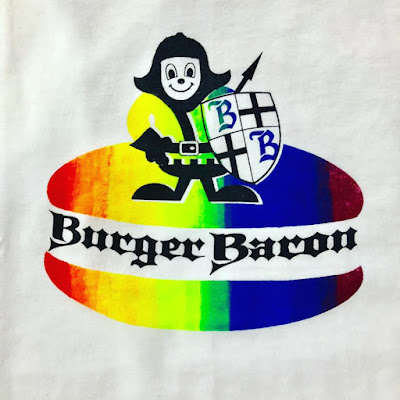 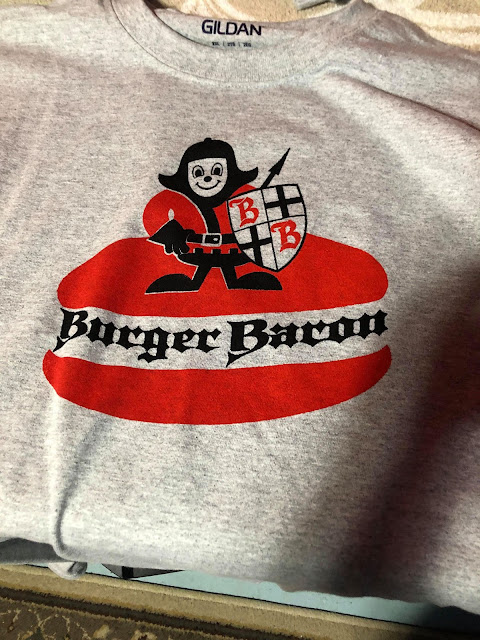 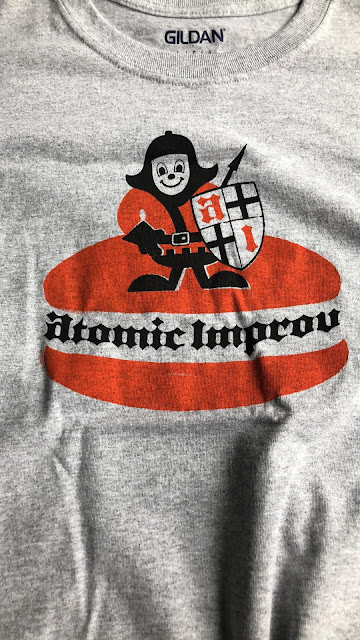 Atomic Improv is one of Donovan's other ventures.
My next stop was the Burger Baron at 7007 82 Ave.  Sadly, this location permanently closed in May of 2019. 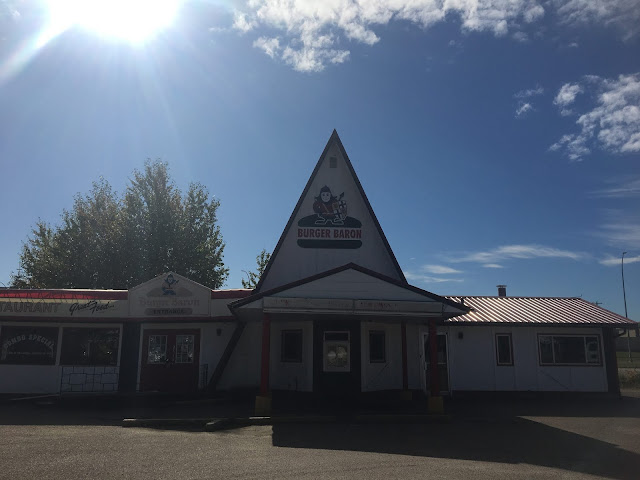 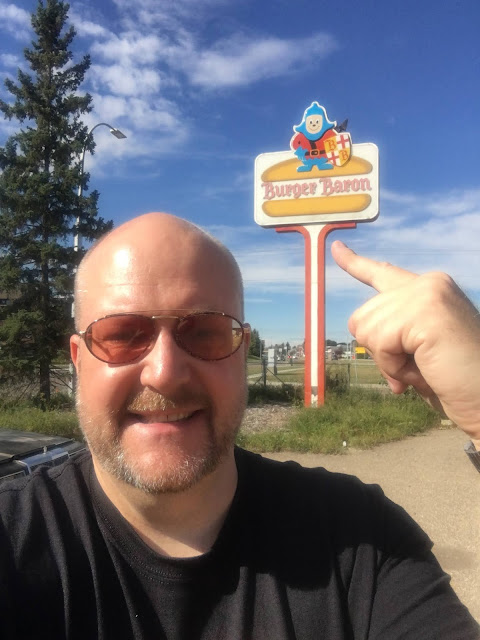 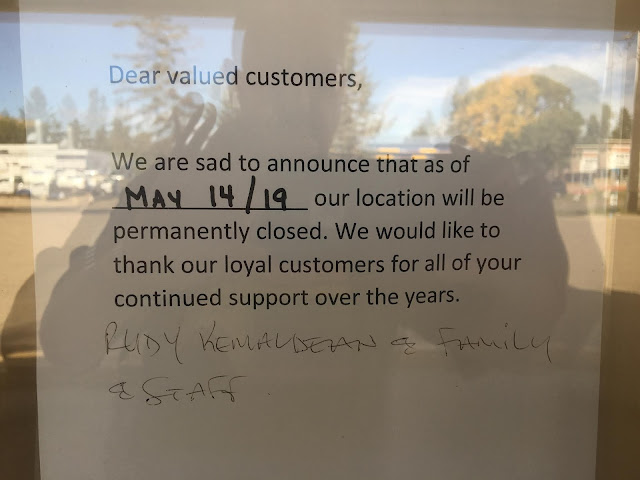 Interesting that Rudy Kemaldean owned this one.  Sal Kemaldean was involved with the Red Deer location (sadly also closed...see below).  Definitely a family affair. 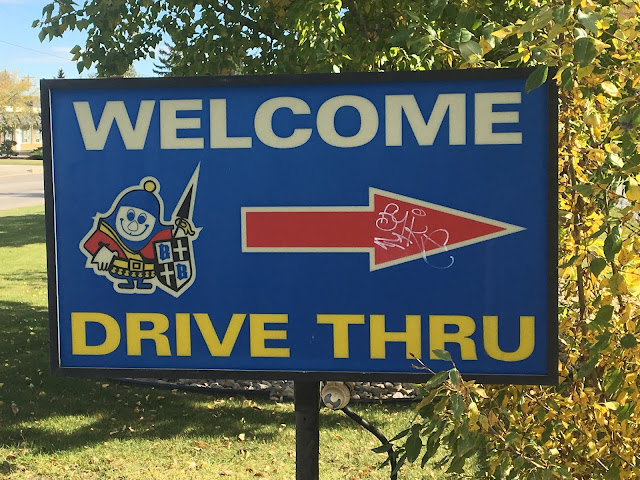 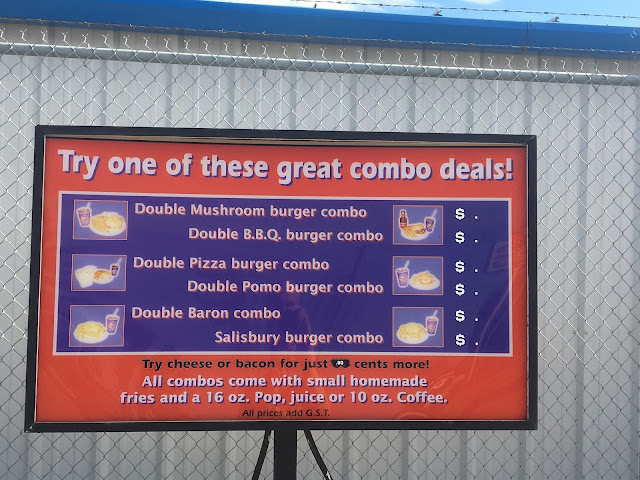 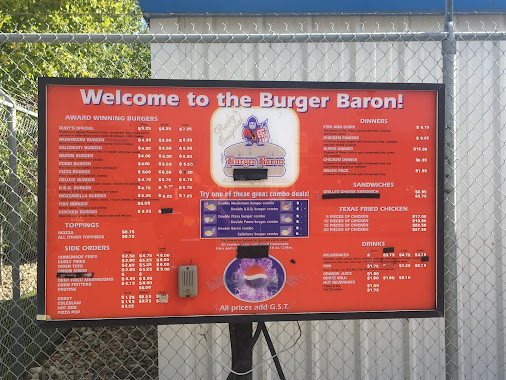 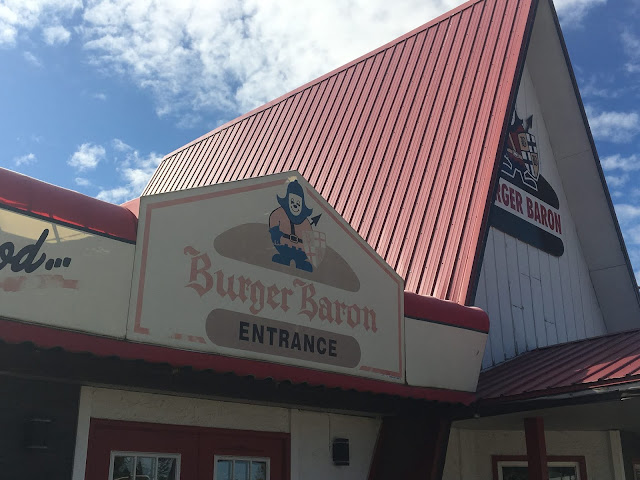 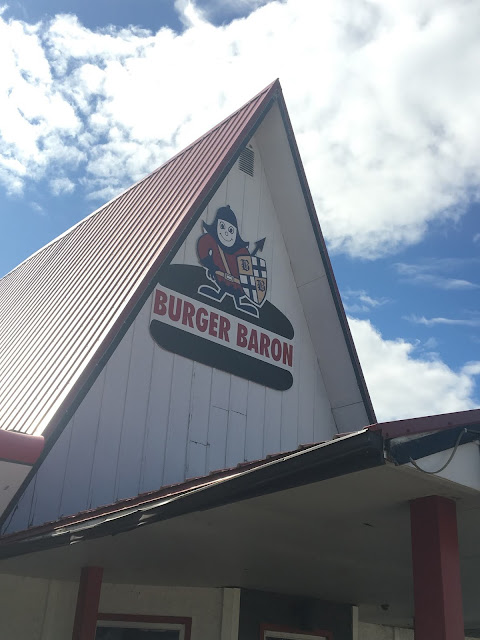 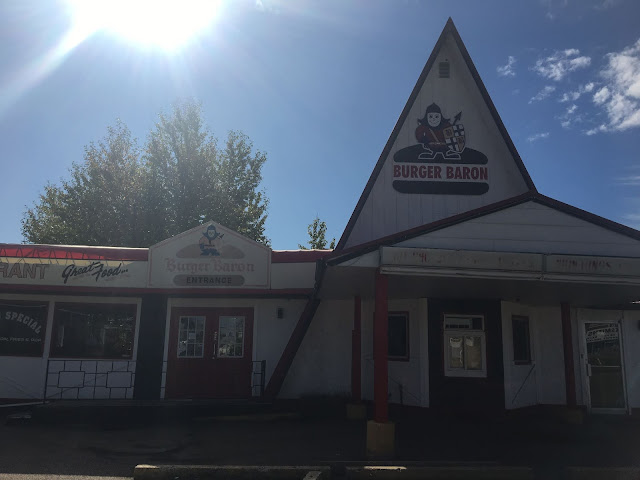 Next stop was the Burger Baron by Rexall Place/Coliseum at 7920 118 Ave.  This one was open, and I had a great lunch there.  Obviously, this used to be a drive-inn location. You can still park in the drive-inn slots, but there's no one on roller-skates to come out and take your order at your window.  As of Sept 2019, this location was still operating, and was doing a pretty good business when I visited. 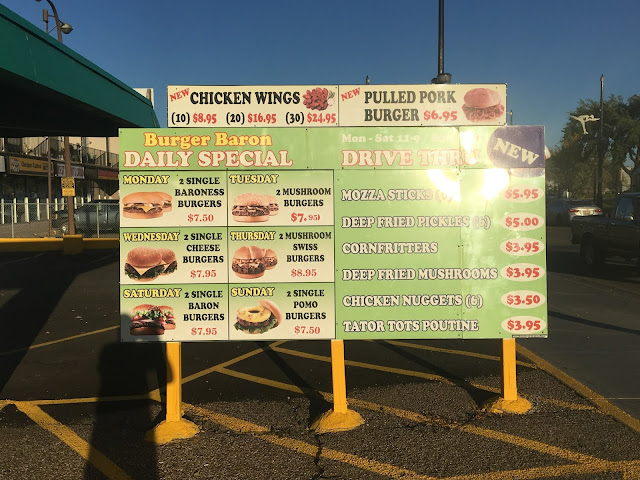 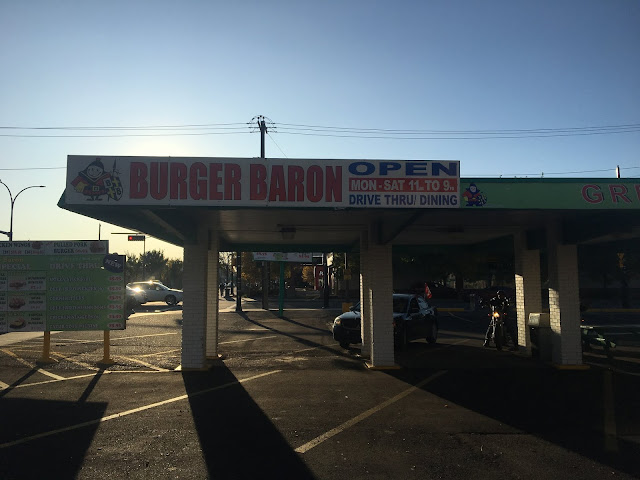 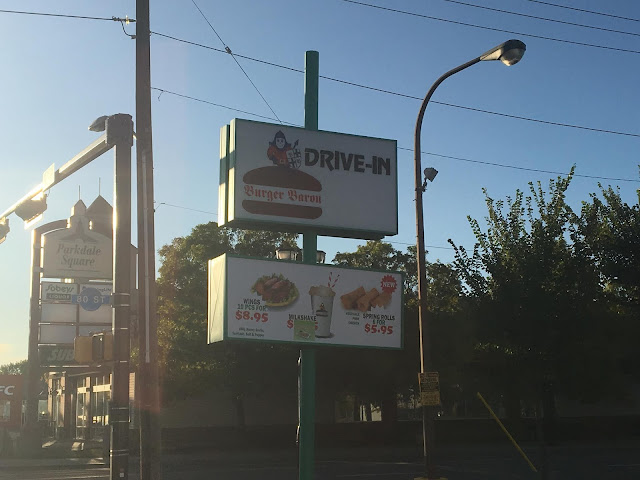 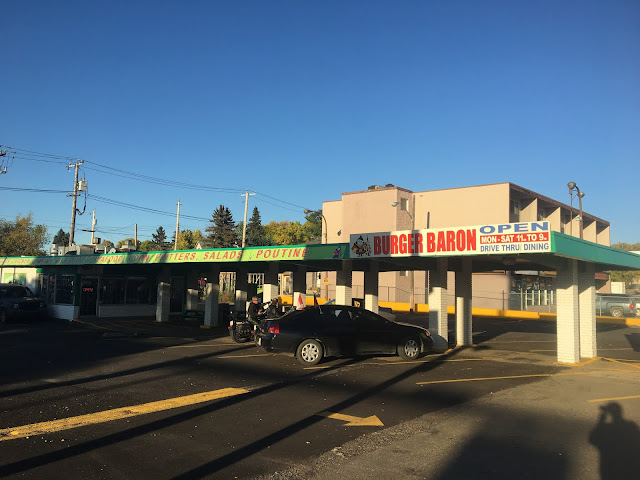 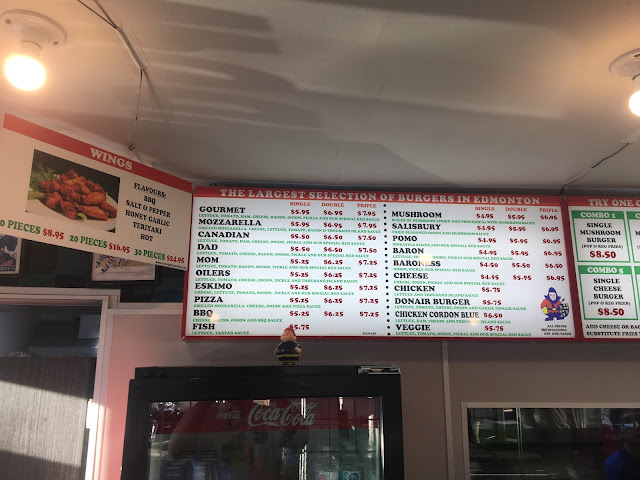 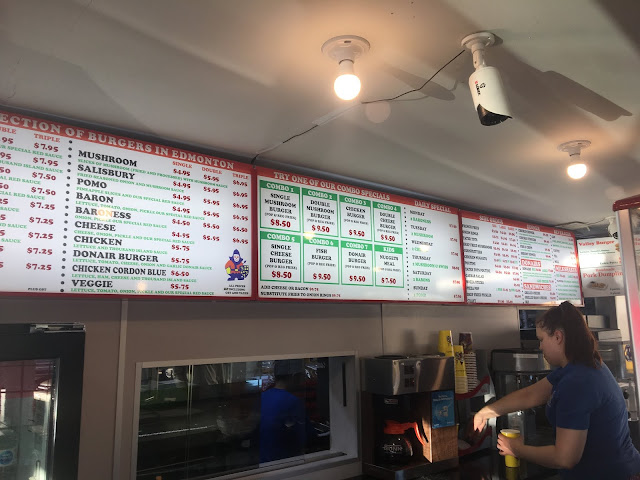 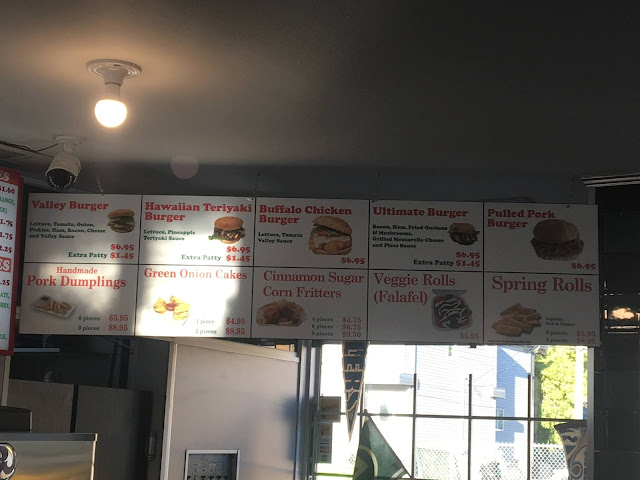 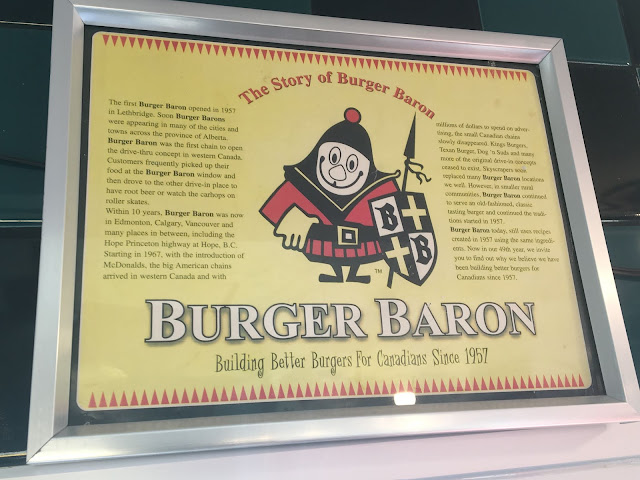 The Story of Burger Baron
(transcribed from the plaque at the Edmonton 7920 118 Ave Coliseum location)
The first Burger Baron opened in 1957 in Lethbridge.  Soon Burger Barons were appearing in many of the cities and towns across the province of Alberta.
Burger Baron was the first chain to open the drive-thru concept in western Canada.  Customers frequently picked up their food at the Burger Baron window and then drove to the other drive-in place to have root beer or watch the carhops on roller skates.
Within 10 years, Burger Baron was now in Edmonton, Calgary, Vancouver, and many places in between, including the Hope Princeton highway at Hope, B.C.  Starting in 1967, with the introduction of McDonalds, the big American chains arrived in western Canada and with millions of dollars to spend on advertising, the small Canadian chains slowly disappeared.  Kings Burgers, Texan Burger, Dog 'n Suds, and many more of the original drive-in concepts ceased to exit.  Skyscrapers soon replaced many Burger Baron locations as well.  However, in smaller rural communities, Burger Baron continued to serve an old-fashioned, classic tasting burger and continued the traditions started in 1957.
Burger Baron today, still uses recipes created in 1957 using the same ingredients.  Now in the 49th year, we invite you to find out why we believe we have building better burgers for Canadians since 1957.

Also, a video was made in July 2013 by YEGventures about the Edmonton Burger Baron locations.
(updated July 2019)
I have loved Burger Baron since I was a kid back in the 1970s.  I have fond memories of my dad and I stopping by the little Burger Baron drive-thru "shack" that used to be on Harvey Avenue in Kelowna on the way home from ice fishing.  I wasn't much of an ice fisherman, but I was always a fan of the Burger Baron afterwards!  Cheap, simple, tasty food to warm you up after a long chilly day not catching many fish thru the ice.  I'm pretty sure my Dad took me there because back then, the basic burger was only $1!

And the tradition continued for me (Burger Baron, not ice fishing) up til 2017.  Every time I went to Edmonton from Calgary for pre-season junior hockey, I always stopped by Burger Baron in Red Deer's "Gasoline Alley".  The last couple of visits, I was lucky enough to chat with Sal Kemaldean, who has been involved with Burger Baron since it's beginnings.  Sadly, the Red Deer location in Gasoline Alley has closed.

There is some serious contention and intrique around who the original "Burger Baron" was (see Calgary Herald story from May, 2013 and the Letter to the Editor in response to the article).  [added Sept 19, 2021].  Omar Mouallem wrote an article "Will The Real Burger Baron Please Stand Up?" about this debate as well in Swerve Magazine on May 2, 2013. [end addition]   As a customer, I won't take sides on that debate.  (Although I do hope the parties involved can come to some reconciliation.)

Regardless of who is the "real original Burger Baron", I'm just glad that this piece of Canadian nostalgia can still be found all over Western Canada, and apparently is still growing! (A new location just opened in Okotoks!

You can still find Sal working the counter sometimes.  I hope I have the energy that he has when I'm in my 70s!   He is a walking talking history of the Burger Baron chain..  I think he told me that his cousin once owned the Burger Baron drive-thru "shack" on Harvey Avenue in Kelowna that me and my dad frequented after ice fishing (sadly it's gone now).

I must say I loved that his sign at the Gasoline Alley location says "Serving Healthy Food since 1957".  I think the definition of "healthy" has probably changed since then, but healthy or not, it still sure is tasty!

The list of Burger Baron locations tells you just how much it is part of the Western Canadian "fabric", yet it doesn't jump to mind as something "truly Canadian", probably because it's only found here - out West - far from the "centre of the universe".  Burger Baron is found in larger centres like Regina (2 locations now both closed) and Edmonton (4 of them in Edmonton!) too, but what makes Burger Baron truly Canadiana is that you find it in smaller "salt-of-the-earth" towns.  And those ones seem to live longer because many big burger chains only grant franchises in places with minimum populations.  Long live small towns!